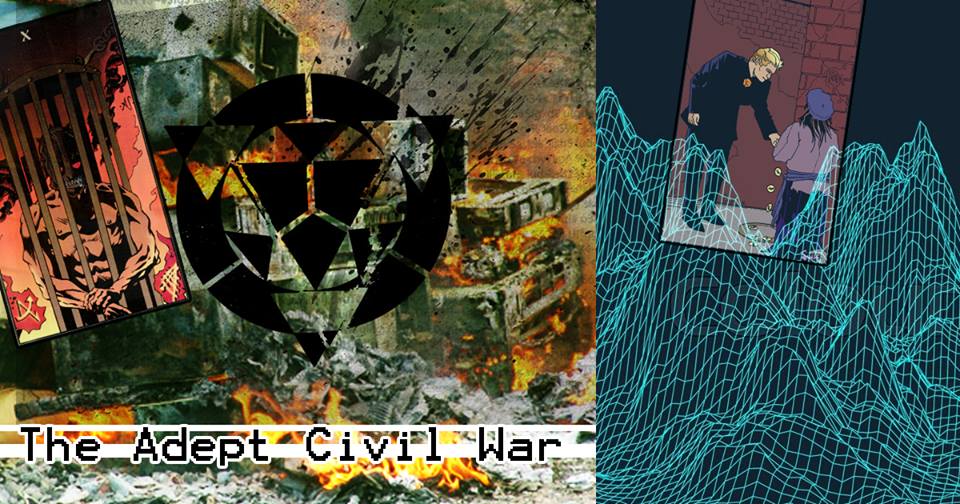 “The Adepts won everything. The Adepts lost everything. Let their graves be a warning that the world you create is not necessarily one you can control.”

The Digital Web was once a frontier. It had infinite promise. It said it would connect us all, educate us all, make each of us more connected than ever before. And then, we burnt Paradise and sold it at the same time.

The Virtual Adepts have achieved their goals beyond their wildest dreams, yet their story is not one of victory. It was no sooner that their precious web started pervading reality and took more of the Masses in, that the dream began to die. A feeling pervades the stable and well-trafficked parts of the Digital Web, that something has been squandered, and that a full potential was never truly reached.

Now, as the digital and real merge more and more, the Virtual Adepts dream seems farther away than ever.

“We offered the Masses perfection, the Grid, eternal in all directions. And what did they do? From infinite knowledge, they created echo chambers of deception and self-congratulation. From endless freedom, they created closed sterile worlds where they willingly became cattle to be bought and sold. From unbounded expression, they made imitations of imitations, shared for the most vacuous reasons.

We will never forgive them for what they did.

This was the final experiment and it is over. There is no Ascension for the many, only for the Elite. This is not up for debate. The Web is ours. We are taking it back, and no one better get in our way.”

– The Declaration of the Elite, posted trinet.talk.critical.ascension, 2009.03.05

The conflict within the Virtual Adepts was brewing for some time. As the Masses gained more access to the web, the Adepts were initially invigorated by the pioneers and minds that came there. But as more and more entered, the more it was not welcomed by a growing number of disgruntled Awakened. The most extreme dissenters against Sleeper involvement in the Web crystallized into The Elite, and cemented their intent to take back what was theirs. But it was more bluster than reality. Until the betrayal.

The Virtual Adepts had long convinced themselves that Silicon Valley was their plaything, and they were using the Technocracy’s tools against them through funding and experimenting. But, as the backroom tinkerers and code monkeys became millionaires, and more and more ‘venture capitalists’ stalked the halls where the future was built, deals were made. The Syndicate made a simple offer – unlimited wealth and power, in exchange for turning the Digital Web over to them and the NWO. And more than the Adepts cared to admit made the deal.

In the waning years of the 2000s, the Digital Web began to fall to the Technocracy sector after sector, assisted by Virtual Adept turncoats who turned over entire digital fortresses. Other bastions of the Awakened hackers found themselves cut off and surrounded by Technocracy controlled sectors. Other Adepts broke away entire sections of the web or broke out deeper into the digital wilderness, leaving traps and destruction behind them. The web is fractured and divided, with fortified lines and controlled access keeping Sleepers well away from the Adepts’ strongholds. But because of this, it has become more and more difficult for new recruits to find the Adepts, necessitating voyages both in meatspace and in the Digital Web to find blossoming new mages before their turncoat brethren do.

The Virtual Adepts are now fractured. Some focus on taking back the Digital Web. The Elite, most extreme of these, call for a permanent disconnection of the Sleepers, and are willing to do just about anything to regain what they believe they have lost. Many have defected into the Technocracy, with some kidding themselves they can change it from within. Others simply focus on surviving.

Still others have set their sights elsewhere. Many have noticed the Digital Web and the real world are ‘closer’ to each other. The most visionary of the Adepts see a time when the Web and the World merge; and so they have forsaken the virtual for the augmented, as the signals and traffic of the Internet of Things and mobile technology pervades us. And some say, that while a war wages inside the Web, a great Convergence of the digital and the real that will render that conflict obsolete – and the real question who will control the world that comes from it.

Until then, the Virtual Adepts are simply the latest of a long line of stories, of mages who climbed too far, too fast. A story as old as Daedalus and Icarus.